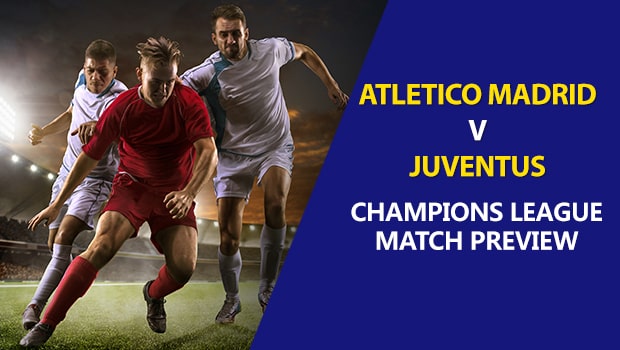 We’ve got a must-watch this week as Atletico Madrid and Juventus go head-to-head in the Champions League. Both sides have lost recently in the finals of the tournament, and now meet in the round of 16. Atletico welcomes Juventus to the Estadio Metropolitano.

What to Watch For

Betting on the Draw: Odds indicate there’s a 32.5 percent chance the match ends in a draw. There’s a draw in under 25 percent of AccuScore sims, suggesting no added side value on the draw.

Head to Head: These two sides last met in the Champions League in the group stage back in 2014/2015. Atletico won the first leg 1-0 at their former home stadium, and finished the second game in a goalless draw, resulting in Atletico placing in first place in the group standings. Juventus, however, ultimately went farther in the tournament.

Cristiano Ronaldo has a 48 percent chance to score for Juventus in this matchup. He averages 4.63 shots overall, 1.12 shots on goal per and 0.65 goals per sim.

Antoine Griezmann has close to a 42 percent chance to score for Atletico Madrid. Griezmann averages 2.21 shots overall, 1.1 shots on goal per and 0.54 goals per sim.

Odds indicate there’s a 51 percent chance the total combined score goes over 2. The OVER hits in 57 percent of AccuScore sims, a two-star (out of four) AccuScore hot trend pick. The average combined score is 2.99 goals.